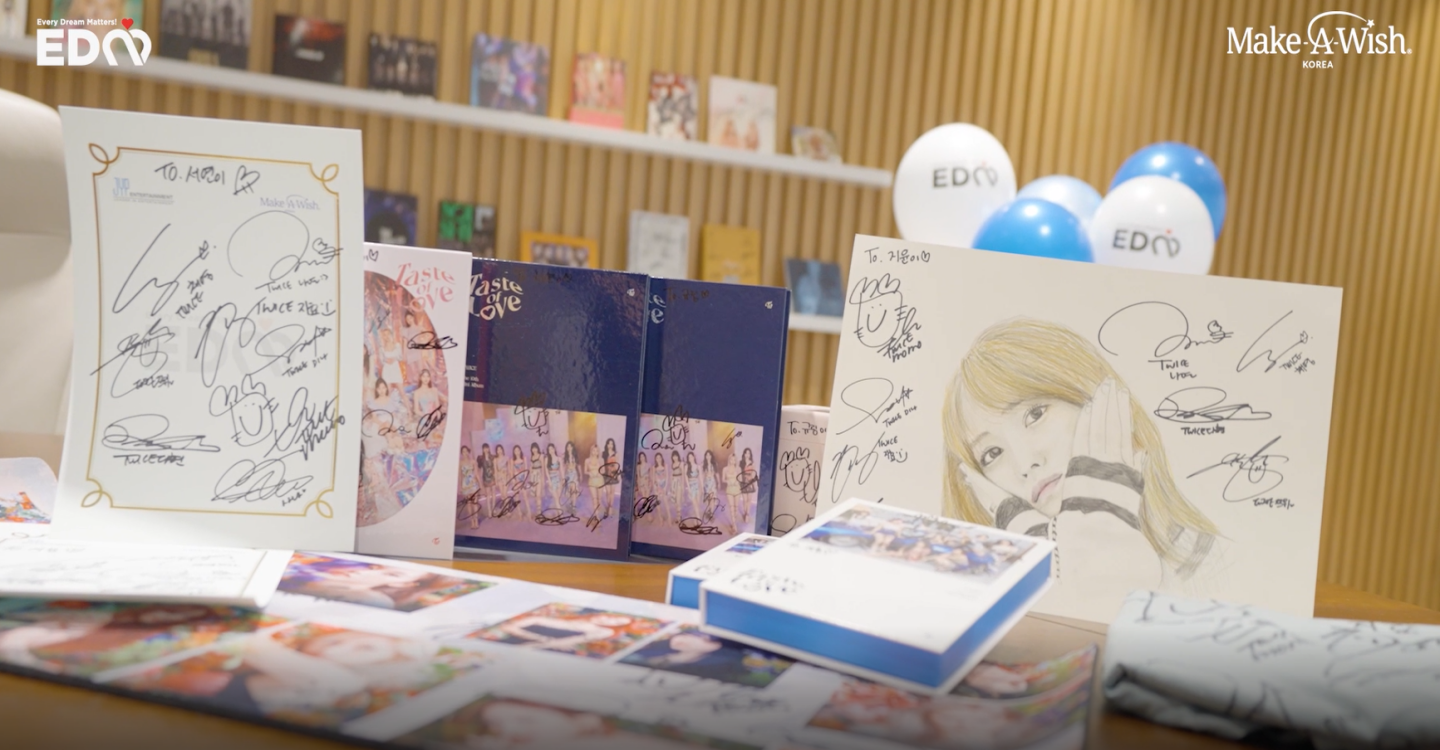 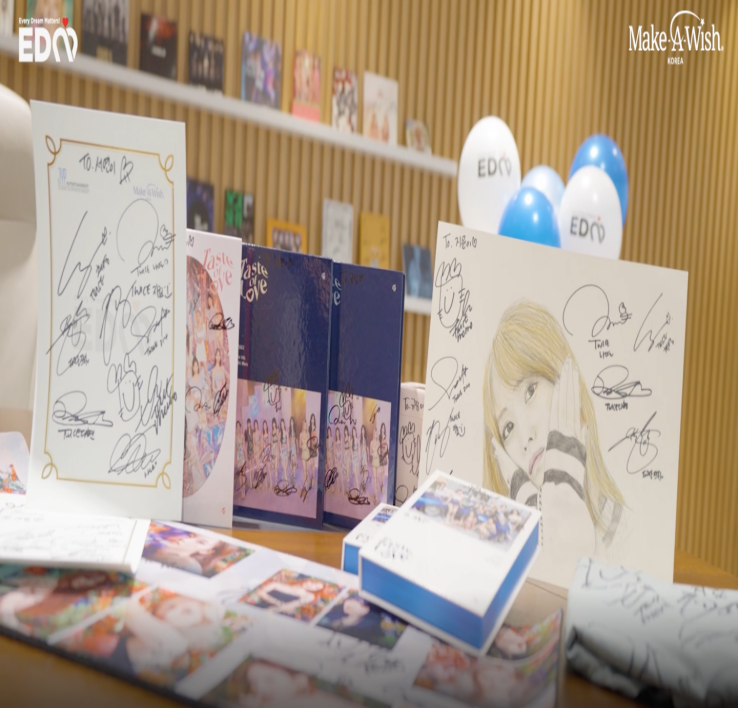 Wish granted
My long-time wish is to meet TWICE!

My long-time wish is to meet TWICE!

“Meeting TWICE today is going to do wonders for my future!” 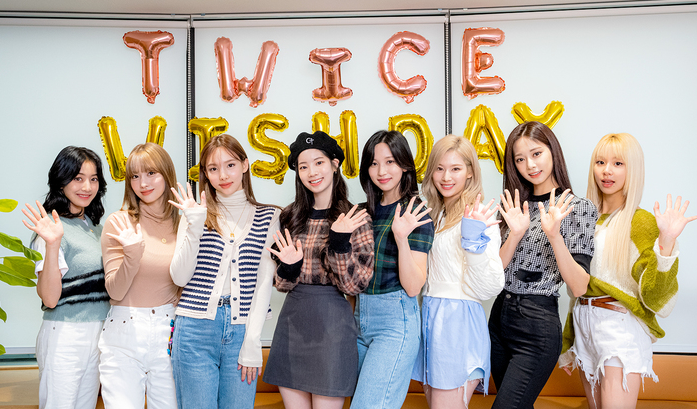 There are 6 children who used their once-in-a-lifetime wishes to meet TWICE. They are from different countries and have different ages and genders, but they all have great love for TWICE in common. 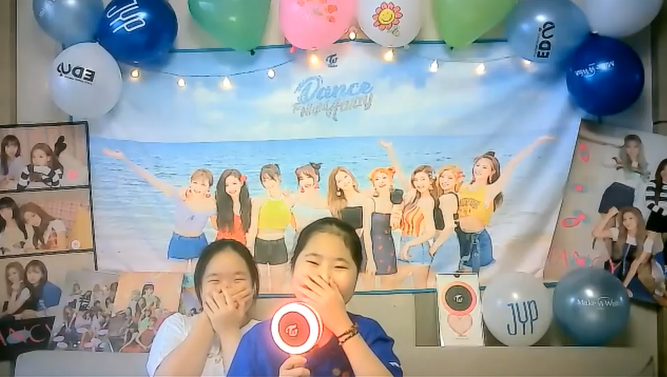 Jiyun was diagnosed with aplastic anemia and received a stem cell transplantation from her little brother, but had to continue chemotherapy due to an additional diagnosis of malignant lymphoma in March, 2018.

For someone who loves to play outside, dance and draw, hospital life was frustrating for Jiyun. The treatment itself was tough, but not being able to do the things she liked was even tougher. Thanks to TWICE, Jiyun was able to smile. She spent time watching their videos and learned their choreography and gained energy when she cheered for them as she watched music broadcasts.

At the hospital’s children’s cancer camp talent show, Jiyun danced ‘Fancy’ by TWICE with her older sister and won 1st prize. For the children’s cancer ward drawing contest, she drew a picture of MOMO and had it exhibited in the ward. She also made an eco bag with the picture of MOMO and keeps it well. As such, JIYUN was able to overcome the tough treatment with smiles because of TWICE. 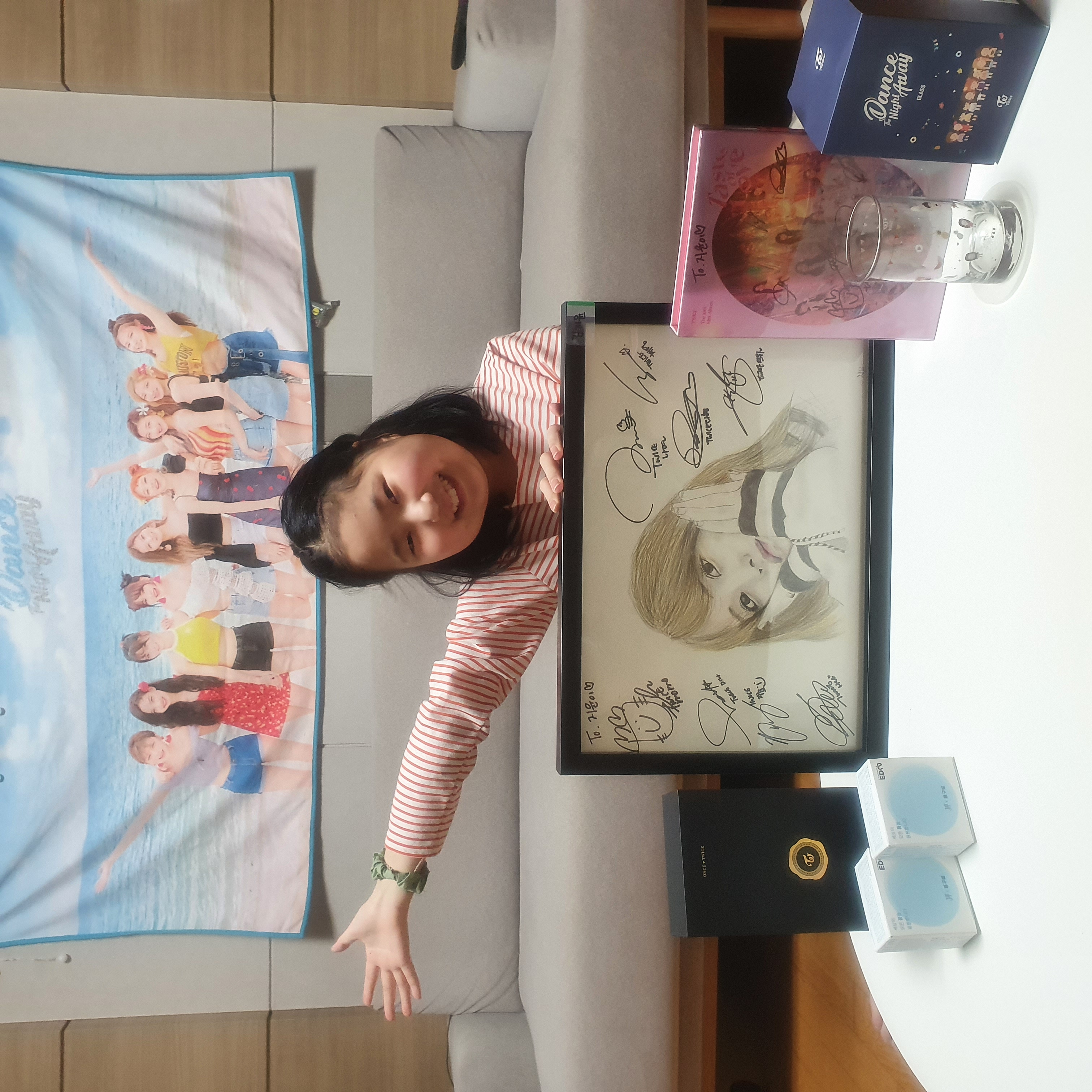 “I’m so happy that I was finally able to meet TWICE!”

The day Jiyun’s wish came true, she couldn’t hide her excitement. She didn’t know what to do when the TWICE members complimented her on her 1st prize dance and autographed her eco bag with MOMO’s picture. You could tell how happy Jiyun was just from her expression.

Jiyun’s older sister shed tears as she saw Jiyun’s wish come true. Jiyun’s mother was reminded of the tough times and thought Jiyun would be happier and healthier after meeting TWICE.

Hyeokseo was diagnosed with mediastinal yolk sac tumor and had a second surgery for tumor removal. His treatment ended in August, 2018, and he is going through follow-up observation.

“I found a goal as I received treatment!”

Hyeokseo was always the life of the party at home, but after he started receiving treatment, he told his family in tears that it would be better to die. But he gained the energy to overcome the treatment listening to the songs of TWICE. The trip to Seoul for treatment was scary and tough, but after treatment, his family helped him find and collect pictures of TWICE. Since then, he found a goal to collect more picture. Hyeokseo overcame the difficult treatment with TWICE.

“My goal is to meet TWICE!”

Hyeokseo only spoke of his wish to meet TWICE. He is pretty shy around people, but becomes very enthusiastic when he talks about TWICE. He was really desperate to meet TWICE. Just the thought of it put smiles on his face. The boy who loved TWICE for their diverse charms finally had his wish come true. Hyeokseo turned twenty and the TWICE members congratulated him. Hyeokseo was so shy that he couldn’t look them in their face, but he was so happy that he didn’t know what to do. He couldn’t explain his feelings in words, but said the meeting was very meaningful for him. He also said he came to value them even more and showed ambition to cheer more fervently. He was so happy that he couldn’t sleep.

Seou suffers from acute lymphoblastic leukemia which is a blood cancer that occurs in the lymphatic cells in the blood and bone marrow. After being diagnosed with the illness in October, 2018, she had side effects from chemotherapy in February, 2019, and had to start dialysis. The treatment went well and ended in August, 2021 and she is going through follow-up observation. Seou says TWICE was a source of energy for her during the difficult times.

Seou liked to dance and became a fan of TWICE after learning “TT” in an afterschool class. She couldn’t go outside because her immunity was compromised, so she exercised by listening and dancing to TWICE songs and thanks to that, recovered her health. She was able to gain energy by listening to TWICE songs and cheering for them. As she watched TWICE encourage others, she thought she would like to become someone like that and developed a dream “to become a pretty and charming idol like the TWICE members”. 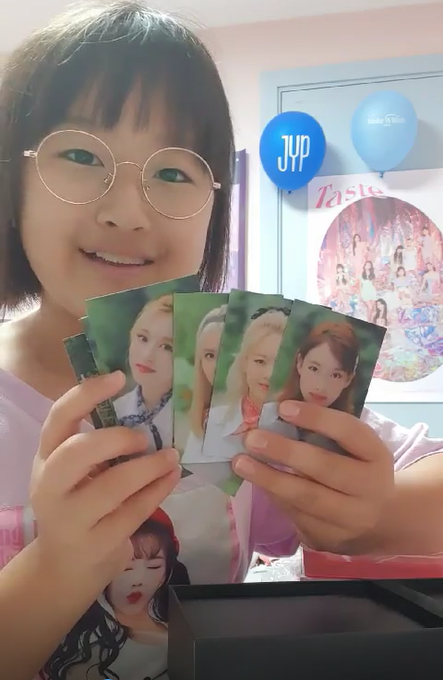 The meeting with TWICE that Seou yearned for finally happened. There was a lot she wanted to say to the TWICE members. Being shy, she gathered up the courage to show her diary which was decorated with TWICE. She also showed them the “Alcohol-Free” dance which she practiced. She was very happy when the TWICE members danced with her. Although it was an untact meeting, Seou was very happy and it was a precious time for her.

Seou says wishes make dreams come true and find you happiness. Her wish to meet her idol, TWICE, came true and she took a step closer to her dream. She was resolved to practice dancing more to become and idol and meet TWICE again. She said she would be healthy and happy as she thought of that day. 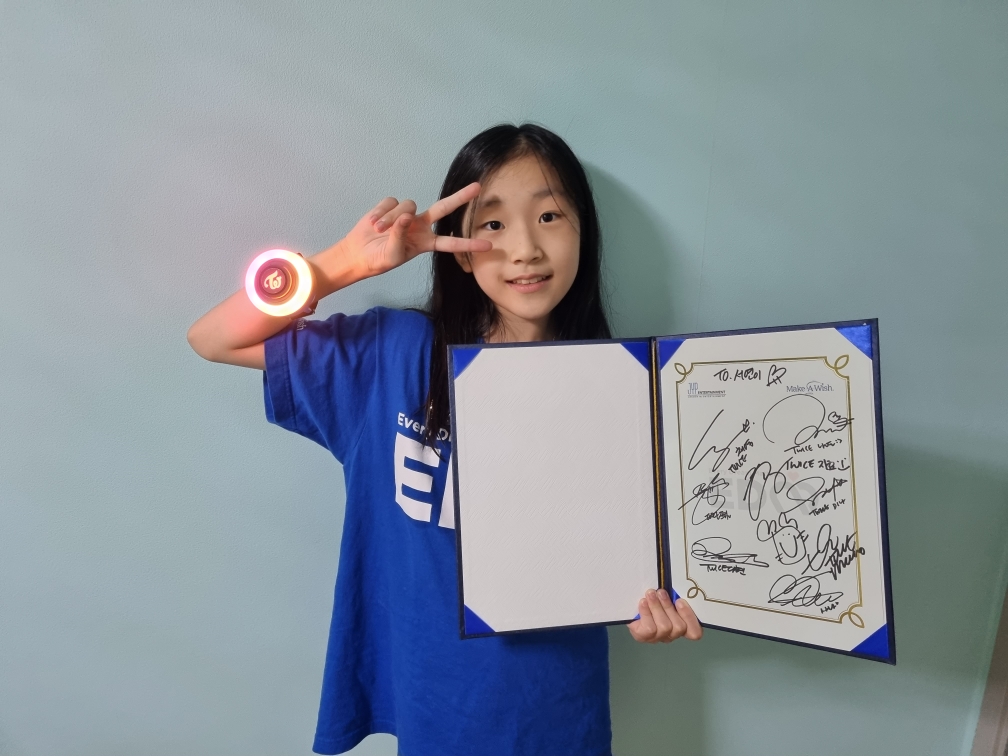 Due to a constant fever and sudden back pains since August, 2017, Seoyeon went to the hospital for a thorough medical checkup and as a result, was diagnosed with the above-mentioned illness. She received chemotherapy for 2 years and 3 months from September, 2017, to December, 2019. The treatment has ended and she is going through follow-up observation.

“The TWICE members gave me much strength!”

Seoyeon always liked to dance and overcame chemotherapy which is tough even for adults by thinking of TWICE. When things got tough, she listened to TWICE and hung in there with the hope of meeting TWICE. 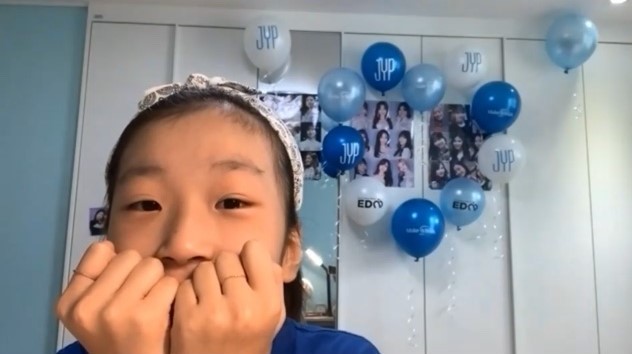 With the thought of meeting TWICE, Seoyeon practiced “Alcohol-Free” on the piano. She prepared to meet them by sending them a letter saying she wanted to play the song for them. Finally, the day of the meeting! Seoyeon had a great time by reading a letter she wrote and playing the song for them. She also told them everything she wanted to say to them. She thanked them for helping her overcome her fight against her illness. 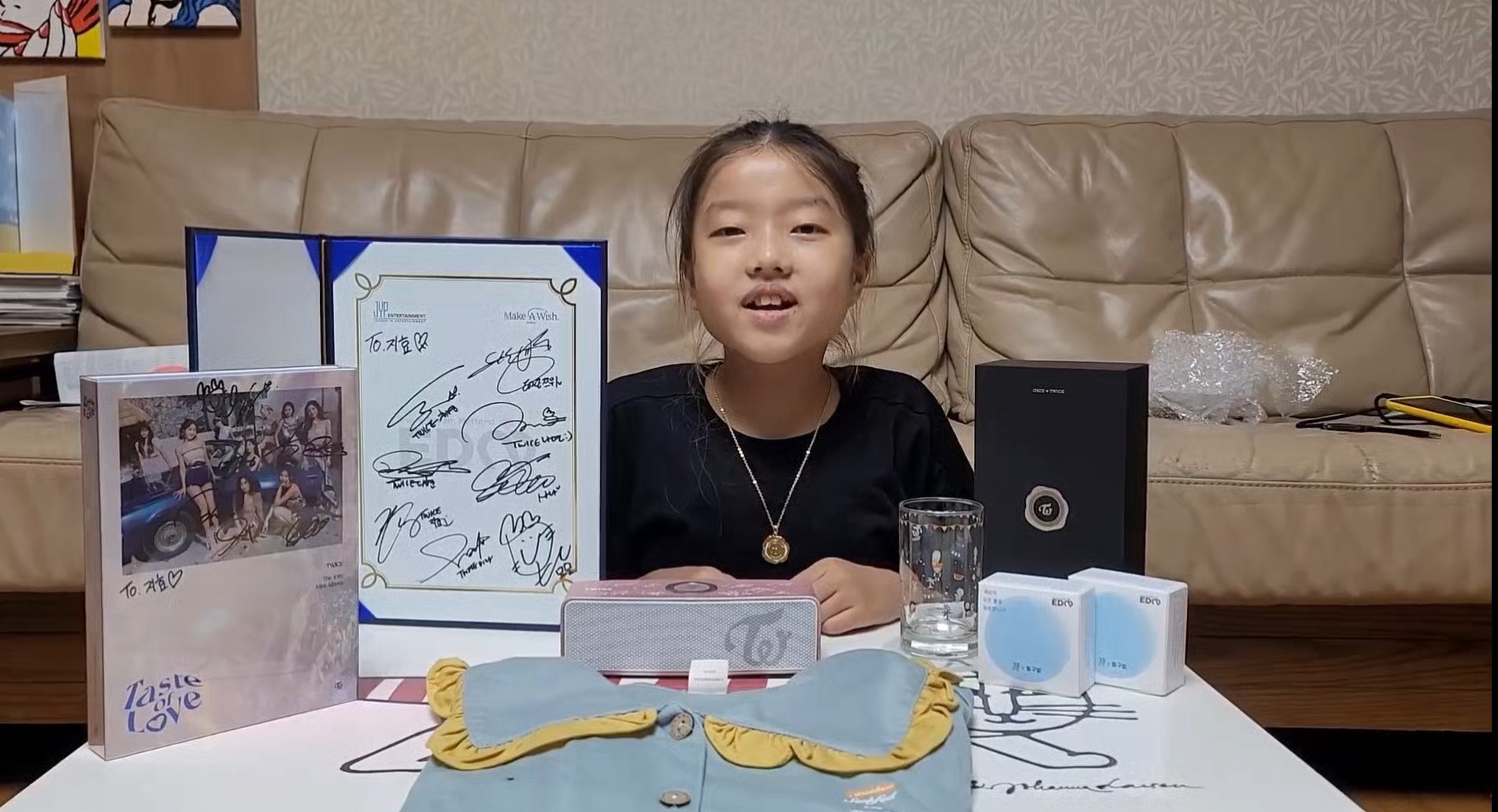 Jihyo was diagnosed with Loeys-Dietz syndrome and is going through constant treatment. She received six surgeries and can’t speak loud because of the long use of a respirator and intubation, but her voice glows when she talks about TWICE.

Jihyo listened to TWICE and danced to their songs by watching YouTube since she was little. She loves pretending to be TWICE with her friends at school. Her role was JIHYO, the member with the same name as herself. At Jihyo’s house, there are many things that show her passionate love for TWICE including a limited-edition speaker.

She spoke about her with to meet TWICE on JYP EDM DAY(*) and that wish finally came true!

*JYP EDM DAY : A video of JYP social contributions which you can watch on the JYP Official Youtube channel.

“I was touched that TWICE sang just for me!”

For Jihyo, TWICE played a balance game by online and sent autographed pajamas with warm hearts. They also had a mini concert just for Jihyo. They sang her favorite song, “Alcohol-Free”. After wish day was over and seeing how happy Jihyo was, you could tell how much she loved TWICE.

Jihyo said she will continue to cheer for TWICE as a member of ONES. Wish day will be an unforgettable day for Jihyo.

Suffering from kidney failure, Mengyao received a kidney transplant, but it failed due to the BK virus. Currently, she goes through dialysis every night.

Mengyao became depressed and nervous as she was fighting his illness, but learned how to be happy by listening to TWICE songs. She became brighter and was able to aggressively make new friends.

Mengyao said “I’m so depressed and nervous, but I don’t think I will give up if I see TWICE, so I would really like to meet them”, but couldn’t attend wish day due to health reasons. TWICE sent her a video message cheering her on along with a signed album.

There is something all 6 wish kids said.

“I’m very grateful and I will never forget this. I love you.”

Thanks to TWICE, JYP Entertainment and Make-A-Wish for giving happy memories to the wish kids.