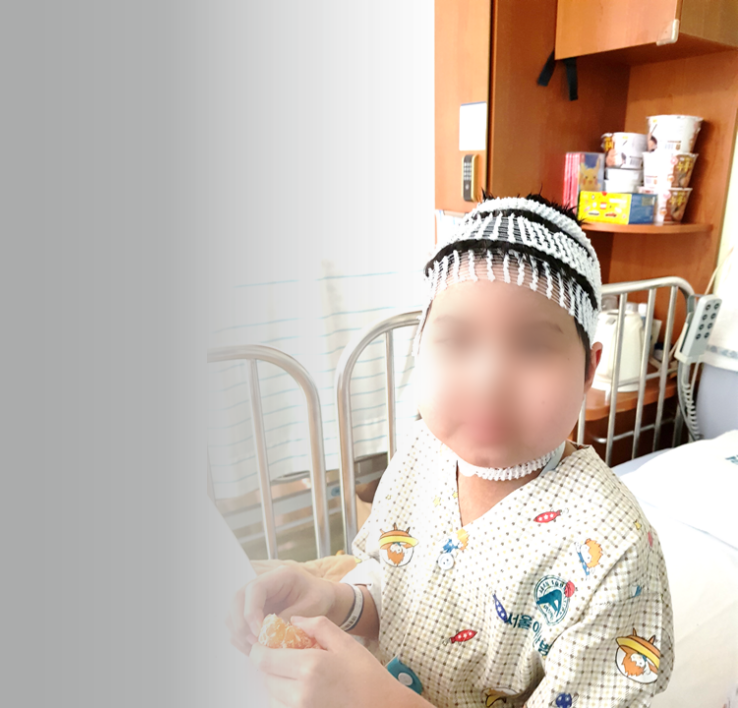 100%
\3,000,000
11 donations
$3,000,000 goal
*All donation goes directly to Make-A-Wish Korea. We are informing you that the organisation that collects and uses donations is the Make-A-Wish Korea.
Because of his malignant tumour that was diagnosed all of sudden, Minho was unconscious for 20days
At first, it was thought that it was pneumonia. However, the symptoms did not get improved after several treatments. Minho then went to a big hospital and after examination, he was diagnosed with a malignant lymphoma. He went through chemotherapy for two months. His family hoped that he would get well and that the  tumour would go away, however, the tumour spread to the brain and Minho became unconscious. While he could not recover from unconsciousness, even the doctor asked Minho’s family to get their heart ready.
*Malignant lymphoma: a cancer that starts anywhere in the body’s lymphatic system
Minho’s parents did not lose their hope and kept praying. Like a miracle, Minho regained consciousness. However, despite this positive sign, the situation worsened: after a transplant operation, Minho had apnoea symptoms that made him to stay at the intensive care unit for three weeks. As of today, Minho is continuing his fight against the diseases. 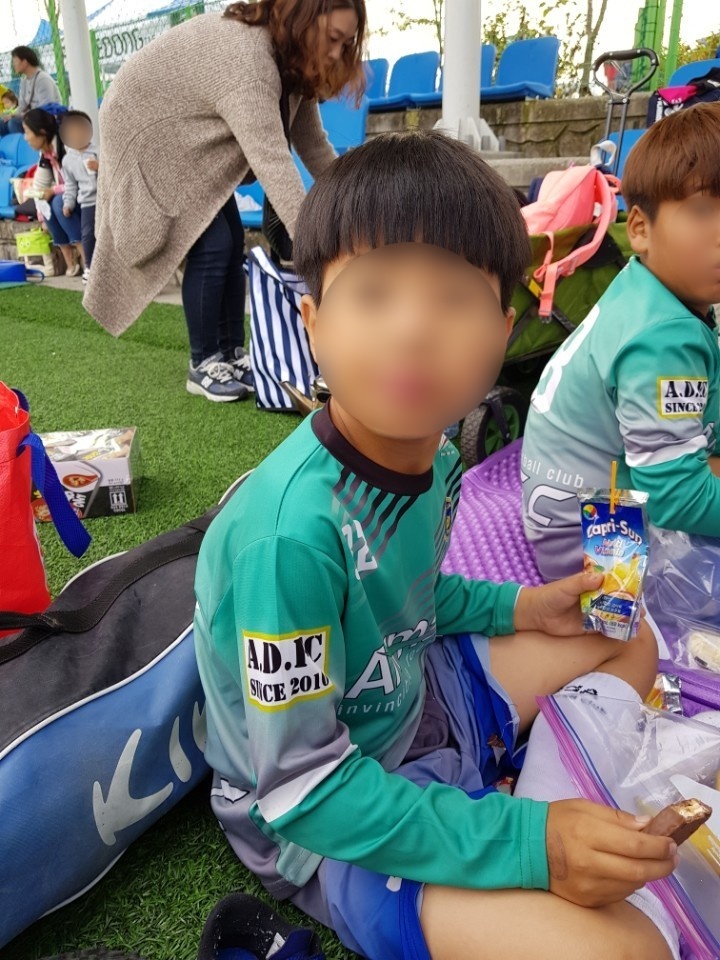 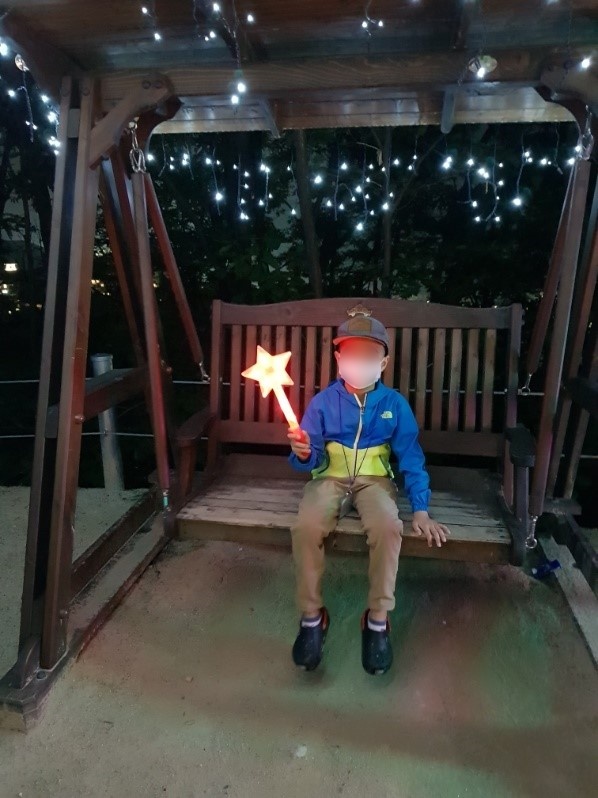 How we use your donations.
Close -
※ In cases where the amount of donation exceeds the goal, it will be spent to realise the wish of another child with a critical illness.
I dream of the day I can run freely in the field.
Minho, who was active as a mid-fielder in his soccer club, went to the hospital having what was assumed to be symptoms of pneumonia. However, he was diagnosed with malignant lymphoma.
Even though he had a difficult fight, even falling into a coma for twenty days, Minho still gets exciting just seeing a soccer ball.
Using his interest in soccer and animation Crayon Shin-chan as inspiration, the volunteers working towards Minho’s wish prepared to get closer with him. 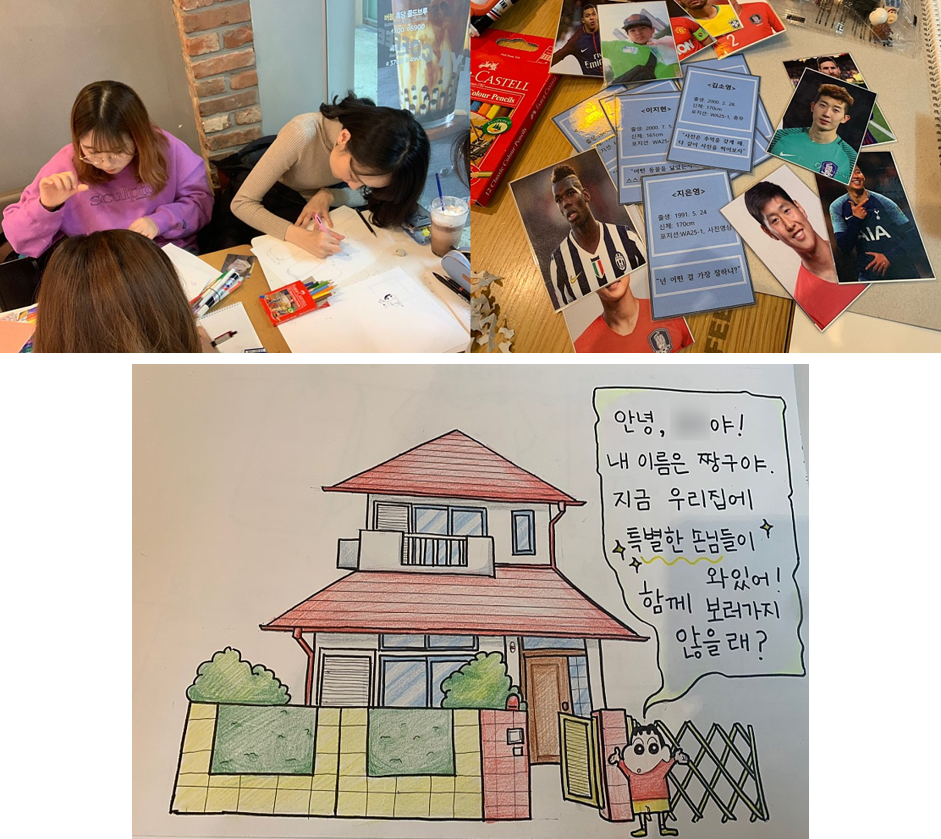 <The volunteers creating materials using Minho’s interests and likes to get closer to him>
The volunteers and Minho was able to spend time together using the board game they made specifically for him and Lego figurines of soccer players.

*This visit happened in January before the spread of the Coronavirus. All visits afterwards happened online.
When asked what he would like to do if he were free to do whatever in a day, Minho immediately answered that he would like to run on the field and kick a ball. Minho missed the time where every weekend he would go out and play soccer with his dad. Limiting time outdoors even more due to the coronavirus, playing soccer became a far-off story.
Minho, whose strength has been weakened due to his long time in the hospital, only imagined himself playing soccer, decided to wish for a VR device that allows him to play soccer games at home after having several online meetings with volunteers.

<Minho talking about soccer online with volunteers>
Volunteers made various efforts for Minho's wish day.
Koo Ja-cheol, an ambassador for Make-A-Wish Korea, also sent a video message for Minho, which touched many people's hearts.
Due to the coronavirus, it was difficult to meet volunteers in person and many items that were ordered from abroad were delayed, so Minho waited for a long time and was able to have his Wish Day in Autumn.
Miho's Wish Day has begun against the backdrop of a field where Minho wants to run freely. 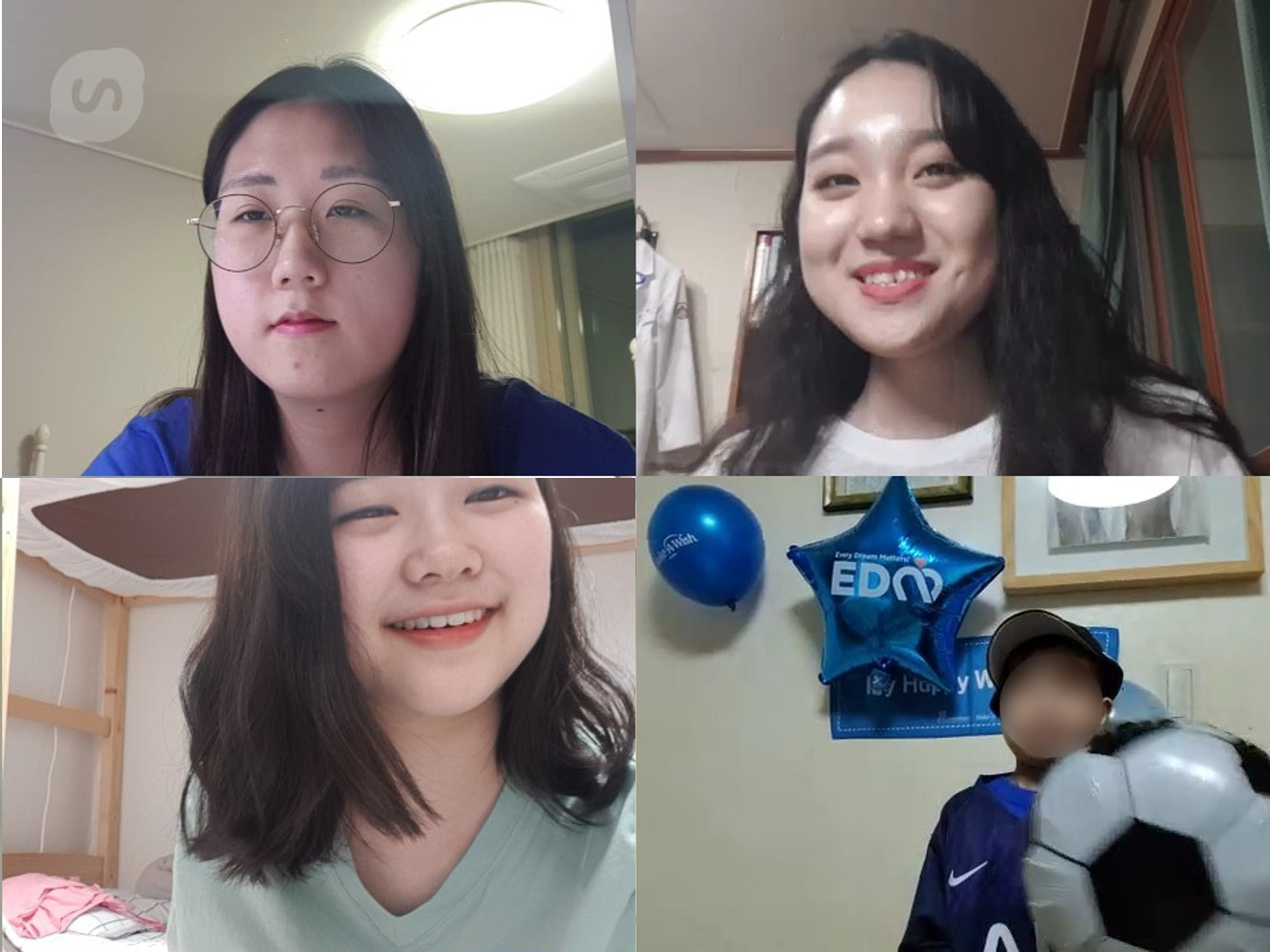 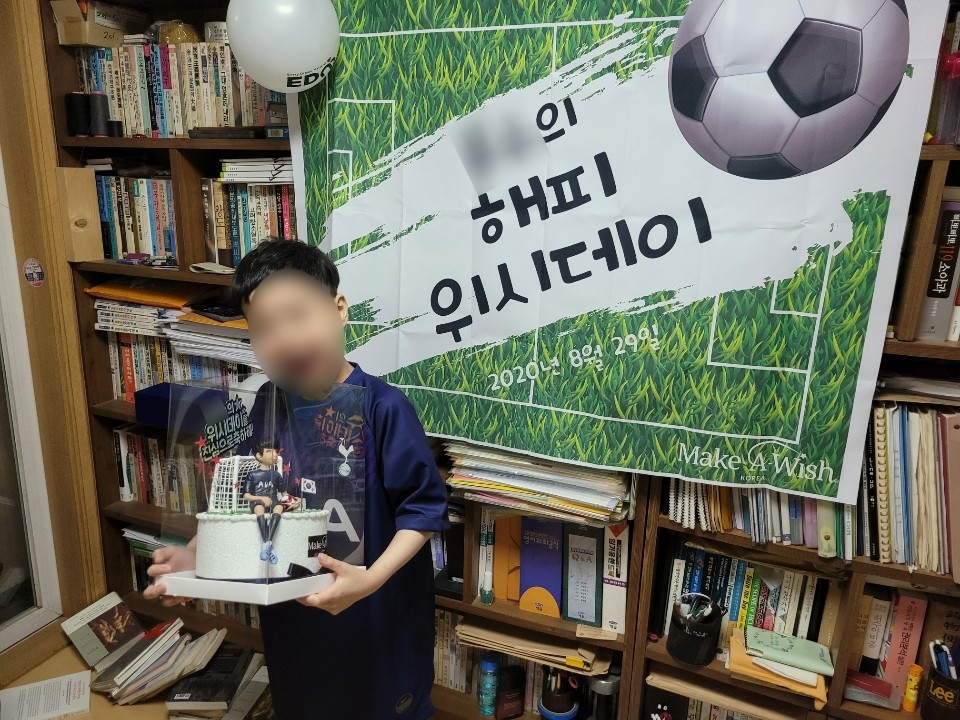 The volunteers sang a song congratulating Minho’s Wish Day as he smiled brightly looking at the cake decorated with a soccer goal.
Seeing the video messages by Koo Ja-cheol and the volunteers made Minho feel that many people are cheering for him.
Now for Minho’s greatest anticipated event: playing the VR soccer game!!
He enjoyed the goalkeeping game, where he was able to move and kick the soccer ball, the most.
Seeing the elated Minho, the volunteers also had wide smiles. 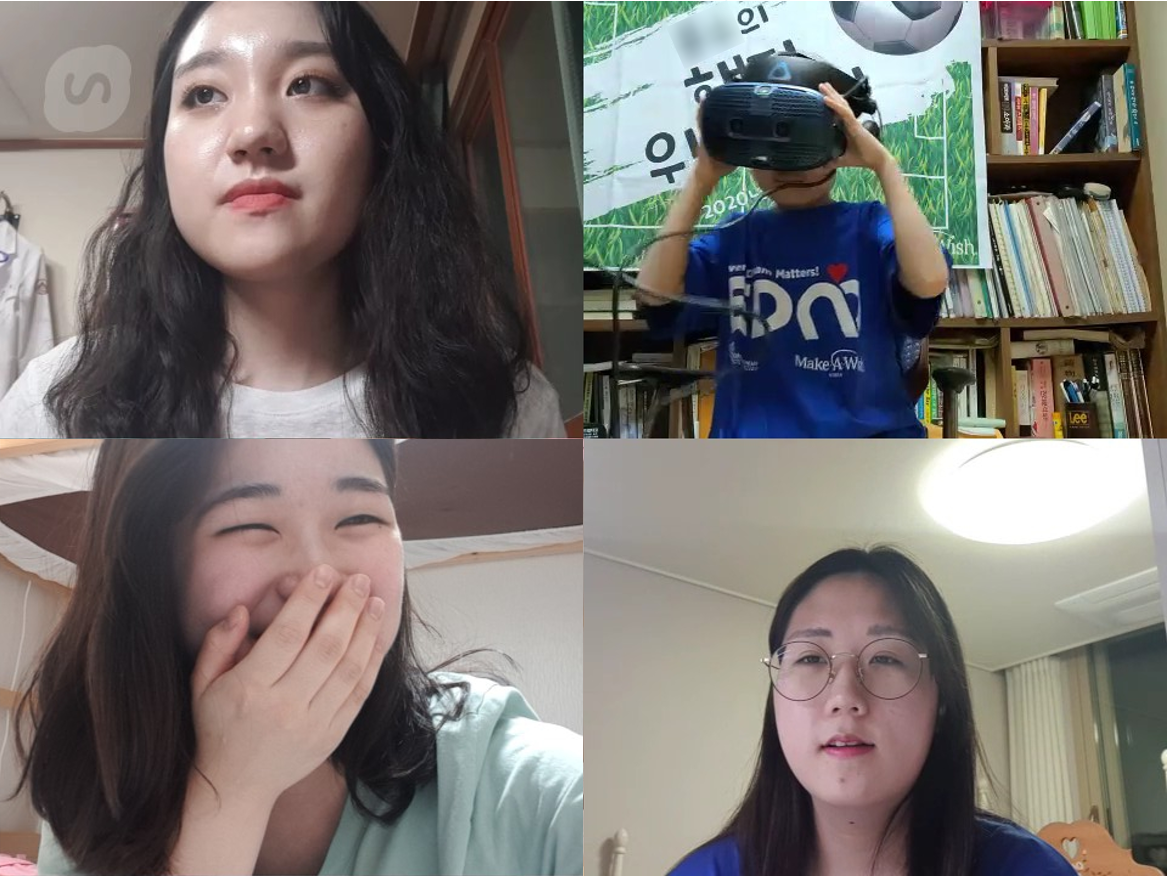 The gifts of the volunteers, such as Minho's favourite Tottenham club items and ‘The Greatest Soccer Player Minho Trophy’, gave Minho joy.

Thanks to the many who supported his dream, Minho is playing soccer in the virtual world today. The strength of his legs will gradually be restored, and the days of running on the field will come soon.
We will always cheer on Minho's dream of becoming the best soccer player.
*Minho’s wish was realised by the supports from the JYP_EDM Wish donation website, JYP Fan’s EDM debit card and matching donations from JYP Entertainment.
Your comment