"I wish to get a mixing equipment"
Jun Sang LEE, 15, Fanconi's anemia 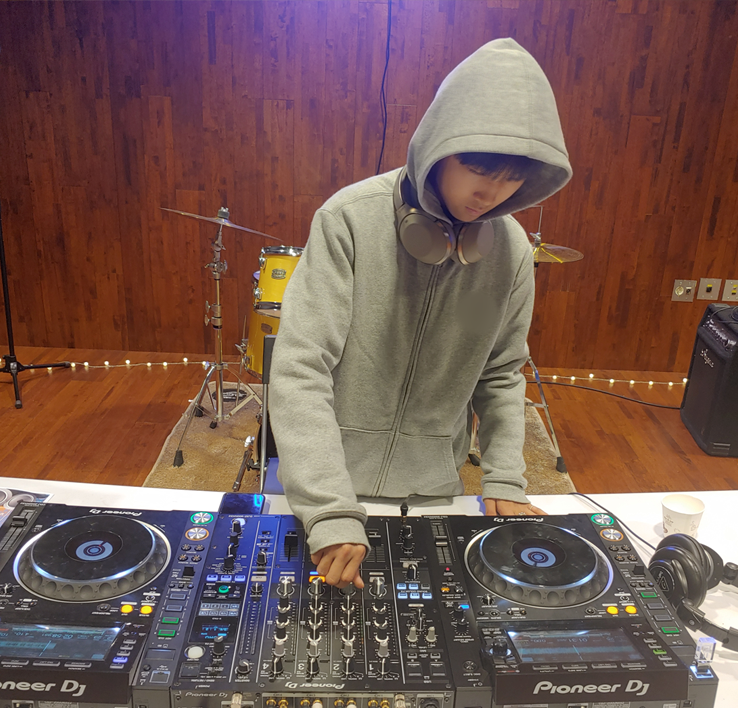 103%
\3,211,860
108 donations
$3,110,000 goal
*All donation goes directly to Make-A-Wish Korea. We are informing you that the organisation that collects and uses donations is the Make-A-Wish Korea.
Jun Sang’s daily life is differ from others because of his rare disease.
Every morning when his friends head to school, Jun Sang starts the day with measuring his temperature when he was a freshmen in  middle school  He battles with high fever and pain brought on by a critical illness known as Fanconi’s anemia that occurs in 2-4 people a year. After experiencing those unexplained symptoms, the entire body becomes so exhausted that one needs to sleep for two days. There are more days when Jun Sang was absent from school and he meet the school nurse more than the class teacher while attending the school. Jun Sang gets used to his daily life that is different from other people.
* Fanconi anemia: not just a normal anemia caused by a lack of red blood cells, but it is affected a lack of all the blood components which abnormalities in the heart, kidneys and skeletal system.
Struggling with critical illness was a difficult trial for the little boy slightly over three years old.
Ten years ago, young Jun Sang, who was only three years old, saw a doctor in local clinic due to frequent nosebleeds and abdominal pain and was diagnosed with possible Fanconi’s anemia. Unwilling to believe the diagnosis results and putting the big hospital visit aside, they continued on as a normal family until one day, his pants were completely soaked with blood. Surprised, they immediately visited the hospital and their doubts were confirmed.  There are several days when the family rushed to the emergency room once a week since he was 3 years old. Critical situations were barely overcome and there was a time when they had to prepare for the bad news. As the only treatment available to Jun Sang is a bone marrow transplantation (hematopoietic stem cell transplant), his family are still waiting for the right donor. 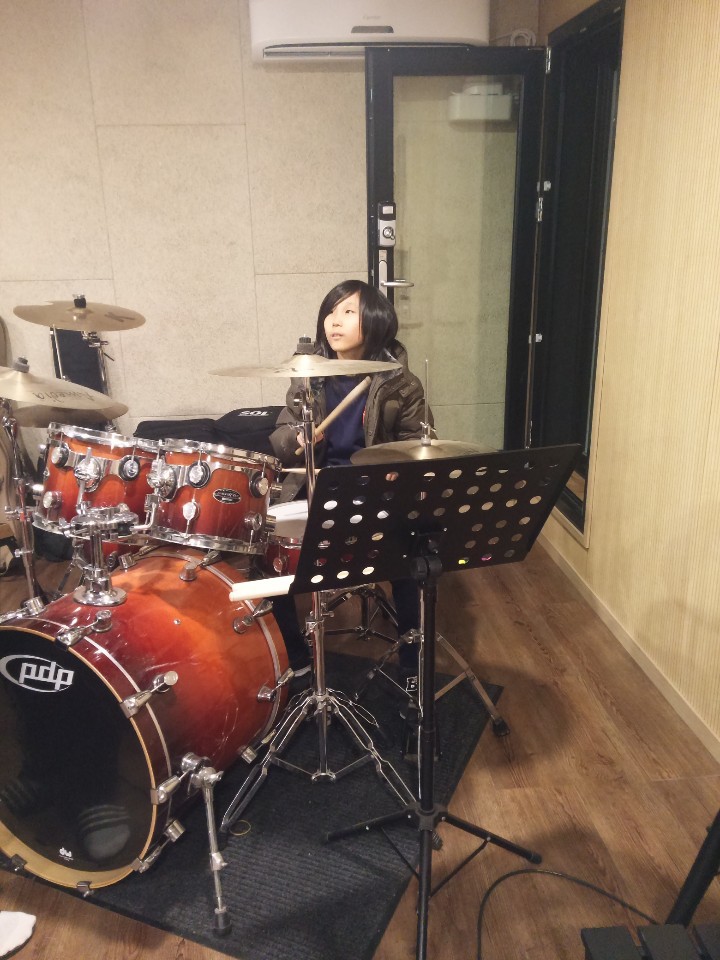 <"I like playing the drum because it helps me not think about the pain"- Jun Sang playing the drums>
Jun Sang’s special treatment is“music”
“Mom, everyone faces hardships, but I won't ever give up at any time.” Music comforted Sun Jang whenever he wanted to give up because of the pain all over his body. Classic music would soothe his angry heart, and rap music would automatically move his body to the rhythm. That’s why he started b-boying and playing drums. Then he happened to join the youth DJing class supported by the ward office.  The music was a big help to Jun Sang who had a problem with mood swings because of his disease, and soon Jun Sang has fallen in love with Djing since it allows him to edit music the way he wants.  He analyzes songs for 4-5 hours a day and then uploads his music on YouTube.  The persistence of Jun Sang, who is immersed in what he wants to do all day, has created the Jun Sang who he is today. 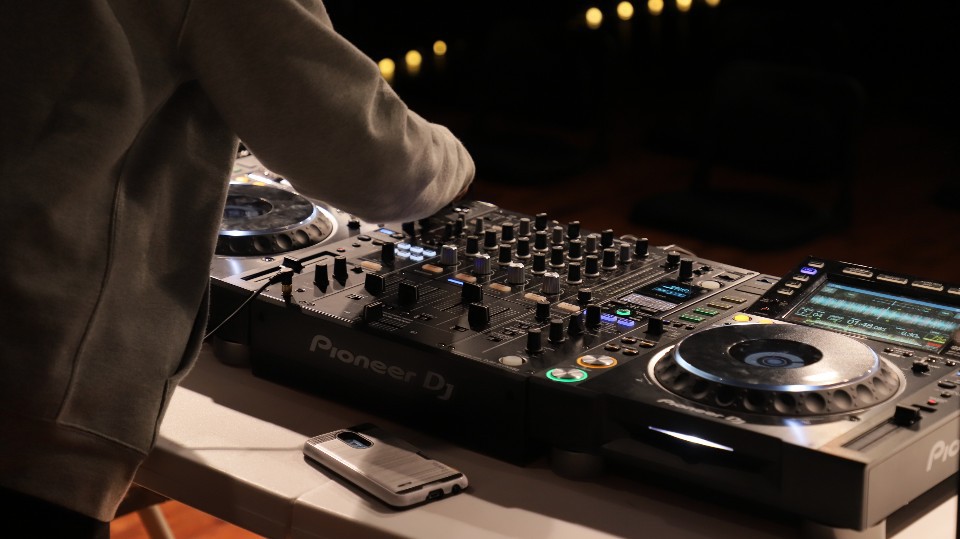 He started Djing to forget the pain and to have a wish.
Junsang's dream is to be a DJ and a producer. He is practicing DJing with Djing teacher's words "You'll be a star in the world" in my heart. Even when he feels anxious about the future, he still gets excited when he listens to music. Therefore, Jung Sang wishes to get a“mixing equipment.” This is because he could play music anytime and anywhere if he could carry around a portale mixing equipment. If he gets the mixing equipment, Jun Sang wants to host a DJing party at the hospital. For those friends who completely understands each other having with incurable diseases, Jun Sang wants to give them the time to dance along to the rhythm of the music even for at least one minute. Your support and participations is crucial for Jun Sang who wants to play a music to console someone can become a famous DJ in 10 or 20 years. Please grant the wish of "music Boy" Jun Sang together.
Use of donated funds

How we use your donations.
Close -
※ In cases where the amount of donation exceeds the goal, it will be spent to realise the wish of another child with a critical illness.
A child who played the piano without knowing how to read sheet music. A child who enjoyed listening to different music with no limits in genre. A child who was unafraid and confident on stage whether rapping or dancing. Jun Sang was this child with so much love for music.
Exhausted from struggling against his illness since the young age of three, Jun Sang felt the opportunity to “Make your wish come true” was special. He quickly applied to Make-A-Wish and at the end of waiting his life changing moment arrived. 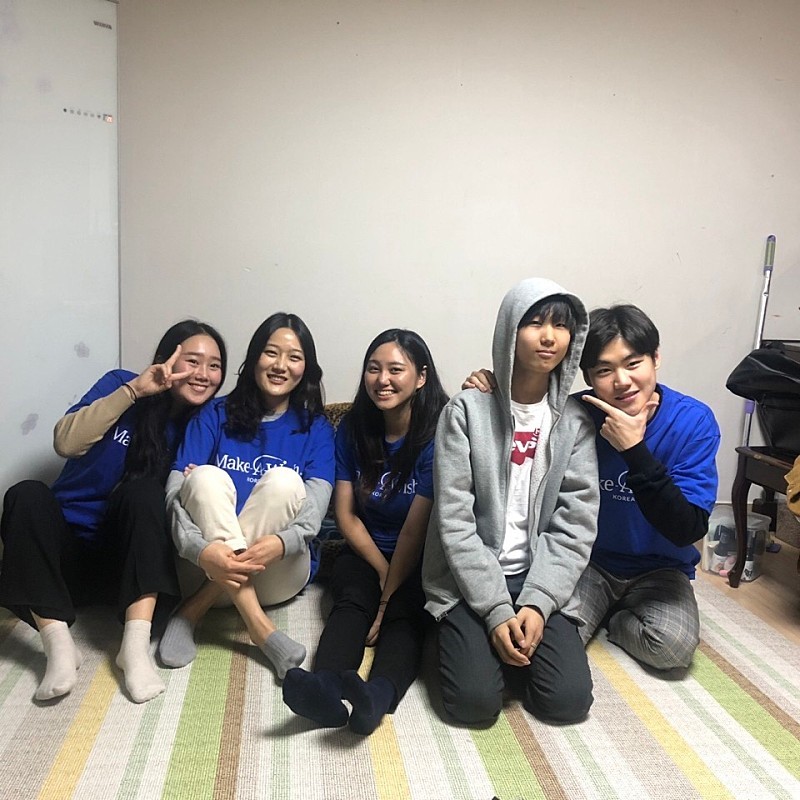 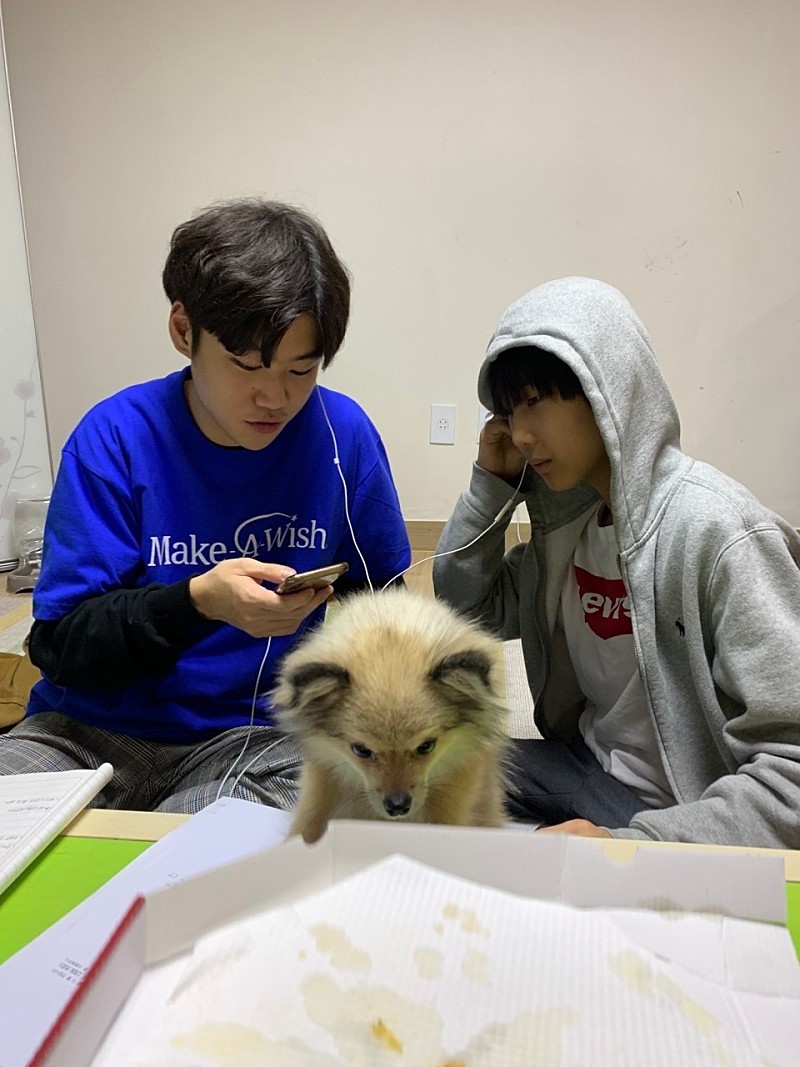 <Shy but excitedly talking about music during the first meeting>
*This visit happened in January before the spread of the Coronavirus. All visits afterwards happened online.

In the second year of middle school, Jun Sang's face was full of excitement, even though he was poor at verbal expressions. While preparing for the performance with the volunteers, Jun Sang made a list of songs, wrote down the names of the people he wanted to invite, and organized the preparations for the performance. Jun Sang was more confident than anyone else in the performance, but he was still worried. This was because he was practicing harder than anyone else in the youth DJing classroom supported by the district office, but the opportunity to receive feedback decreased as the class was closed.
Nice to meet you, Jun Sang!
Many people gathered for Jun Sang, who was worried. Yoo Young-joon, team leader of JYP Entertainment, specifically taught him how to handle the DJ mixer, and Ahn Sang-wook, a teacher in the youth DJing class where Jun Sang attended, gave feedback on the mixing song. DJ Jesse even took care of Jun Sang by asking if he had any difficulty preparing for the performance.

I'd like to try Back-To-Back DJing.
Instead of playing a pre-arranged list of songs, two or more DJs improvise and alternate between songs depending on the atmosphere, environment, and concept of the site. Jun Sang said he wanted to back-to-back DJ in his usual performance, but he always did DJed alone because it was difficult to find a partner to work with because he had to consider the genre of the song and the speed of music (BPM). When Jun Sang said that he wanted to back-to-back DJ with Yoo Young-joon, he accepted. Expectations for the performance increased, thanks to Jun Sang who was serious while talking throughout the rehearsal.

<"I think this is a good way to play in this song">
Now, it's time for Jun Sang's performance!
Past the nerves, Jun Sang's performance began. After DJ Jesse gave us a spectacular opening stage, Jun Sang's turn came. The order of Jun Sang's solo performance before the back-to-back DJing. Jun Sang, who entered the stage with encouraging applause, looked a little nervous, but showed various gestures when he started DJing. I was able to see how confident and comfortable Jun Sang was when he performed. 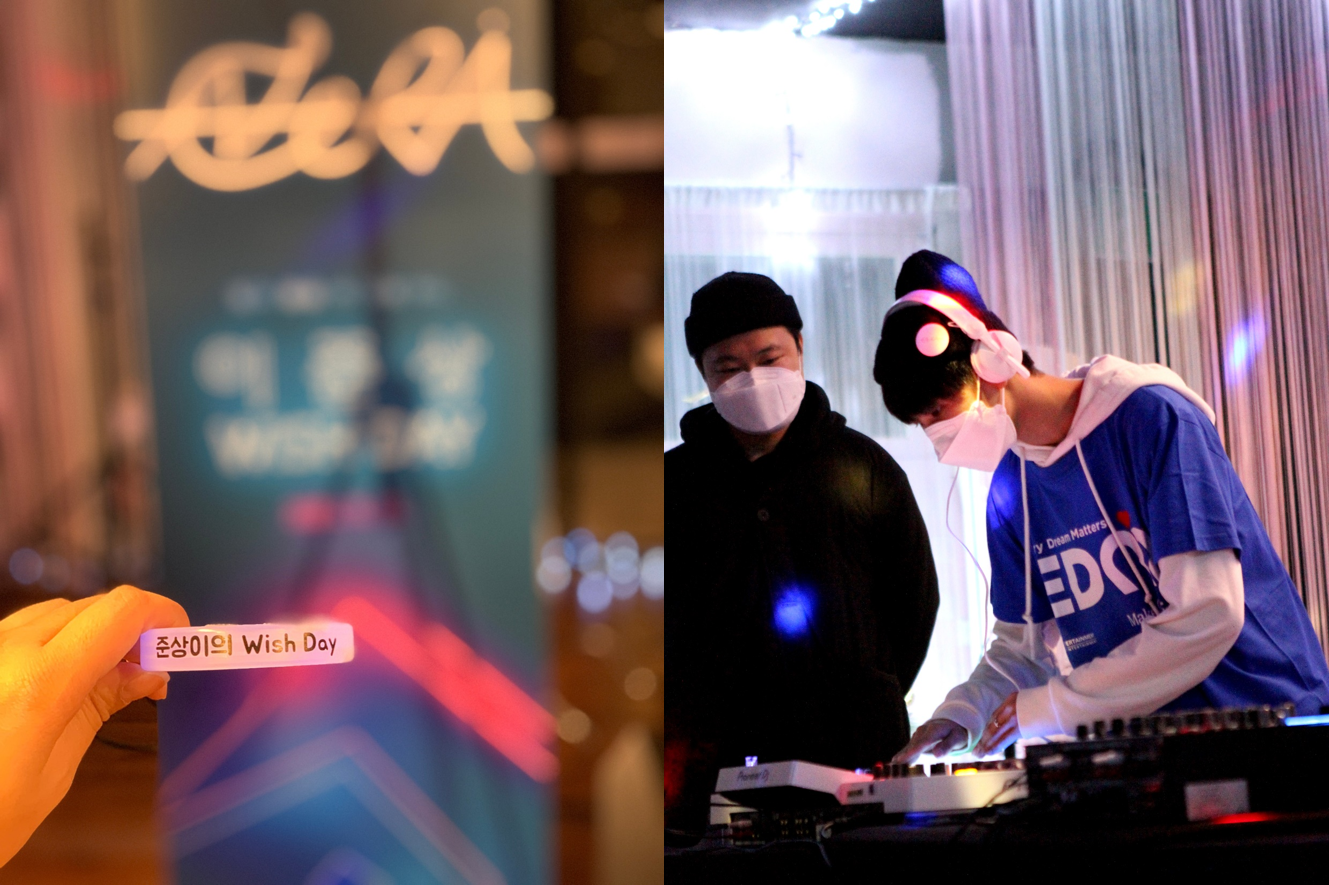 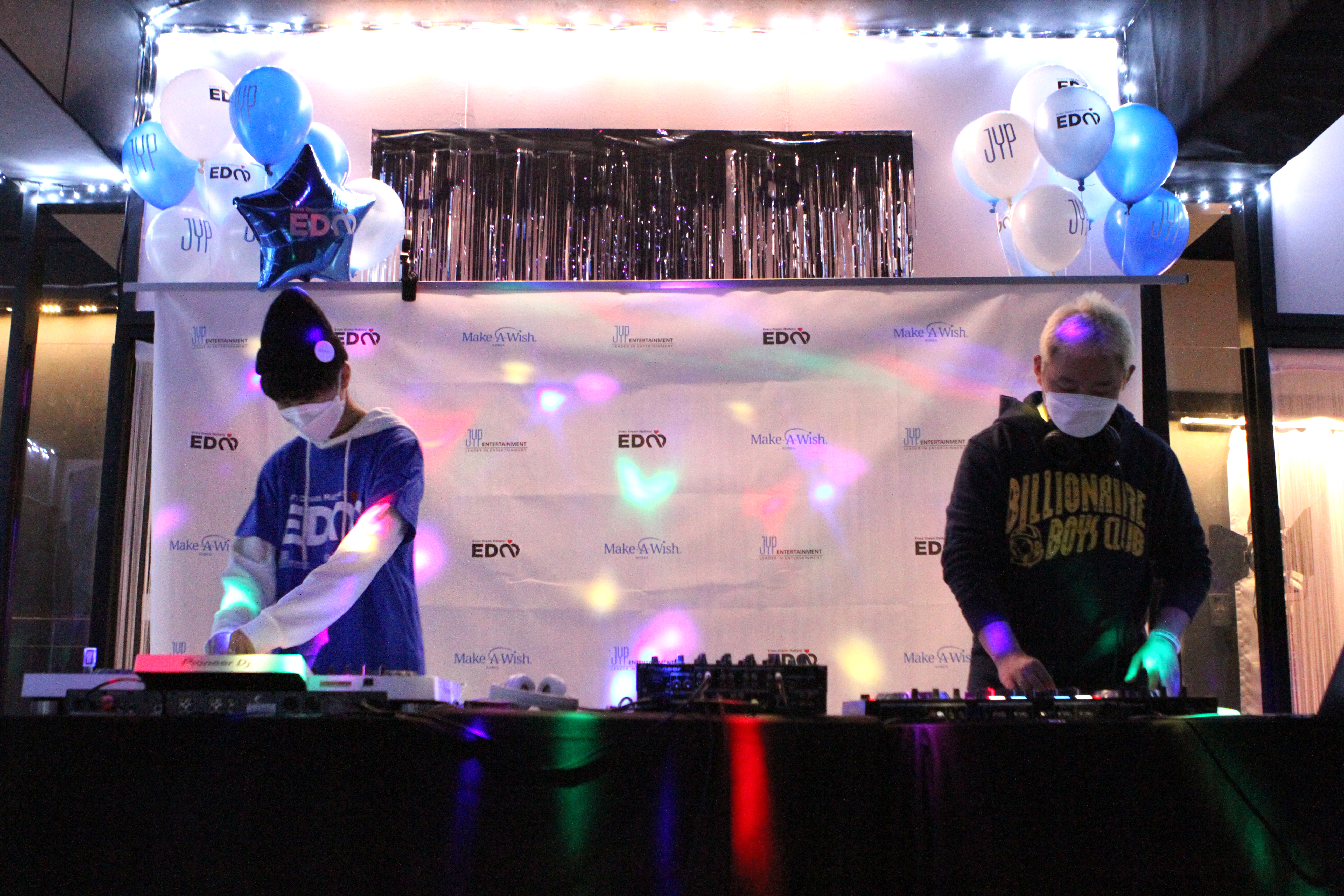 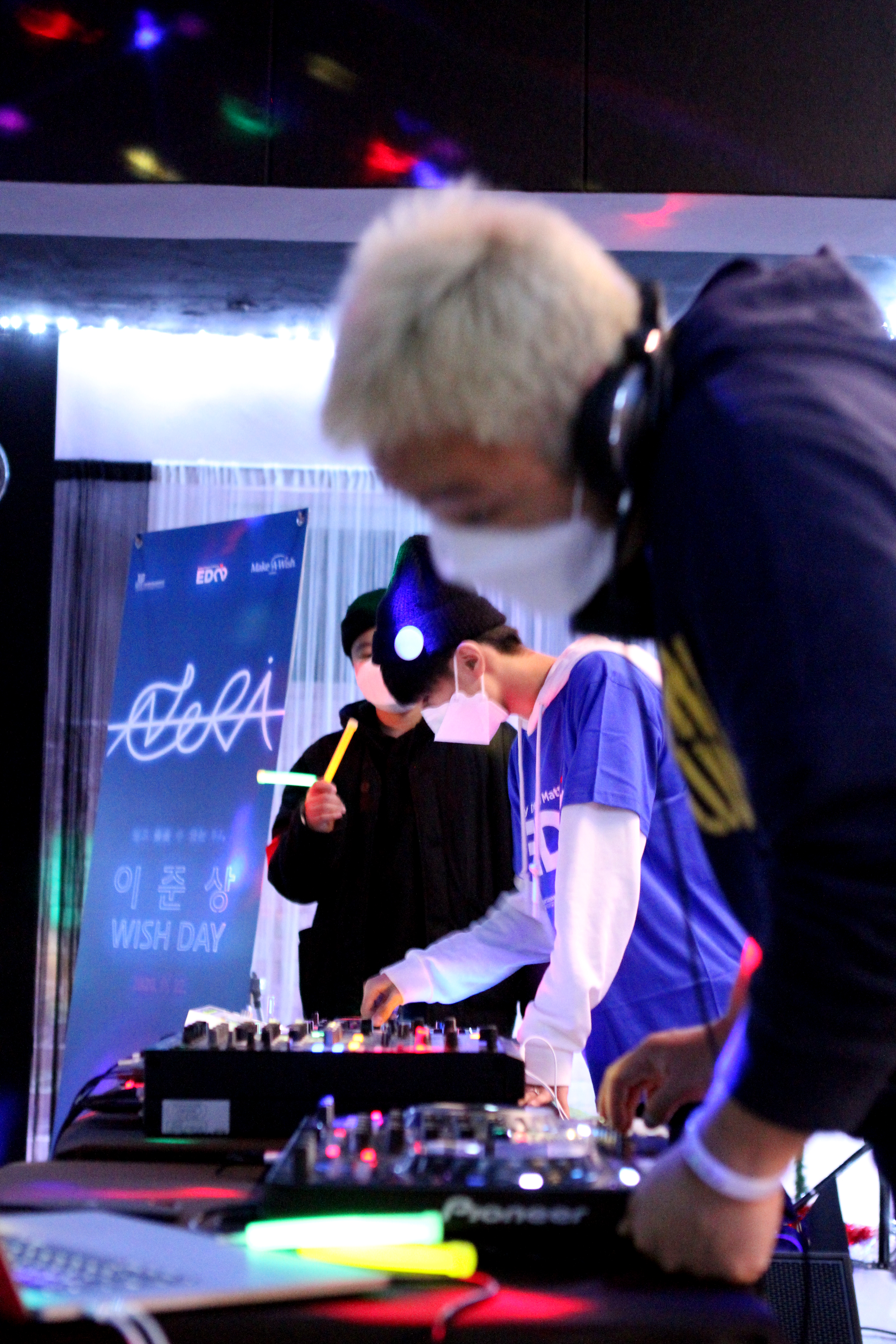 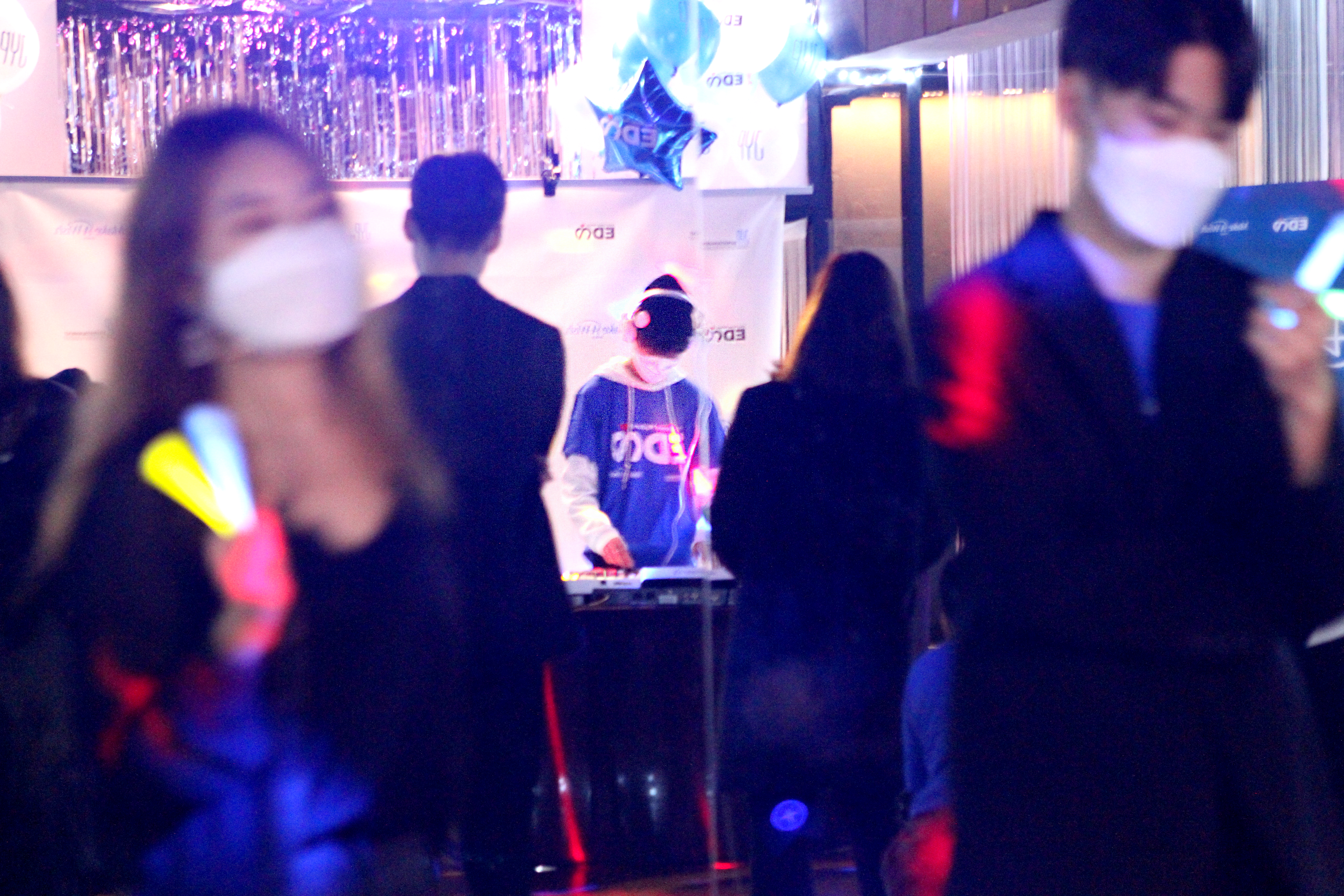 Following Jun Sang's solo performance, the highlight of the day finally began. Jun Sang and Yoo Young-joon worked together in various genres from hip-hop to dance music. The performance continued longer than scheduled, as the two worked so well together. I was worried if Jun Sang was getting tired, but everyone was relieved and enjoyed the music because Jun Sang smiled throughout the performance. 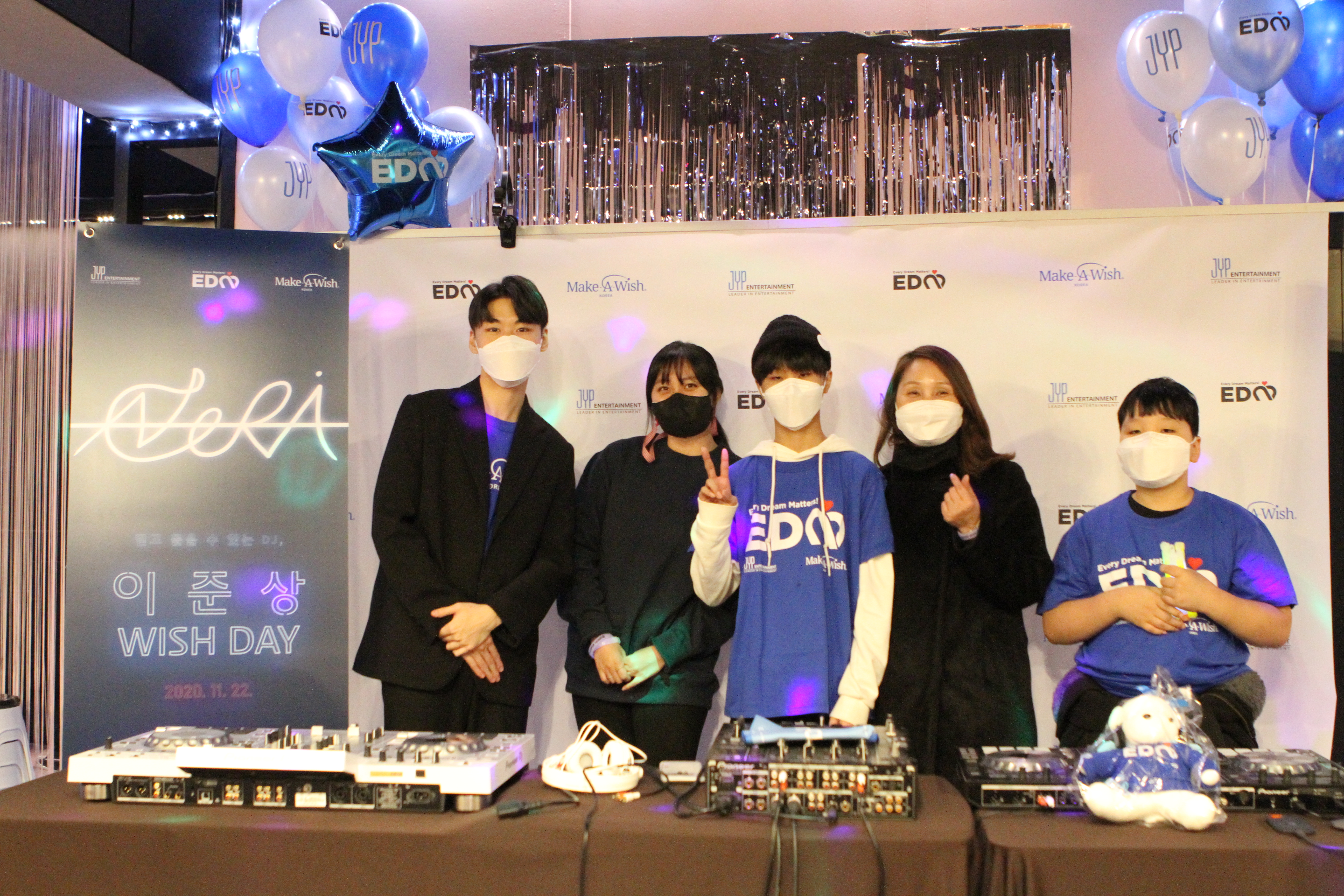 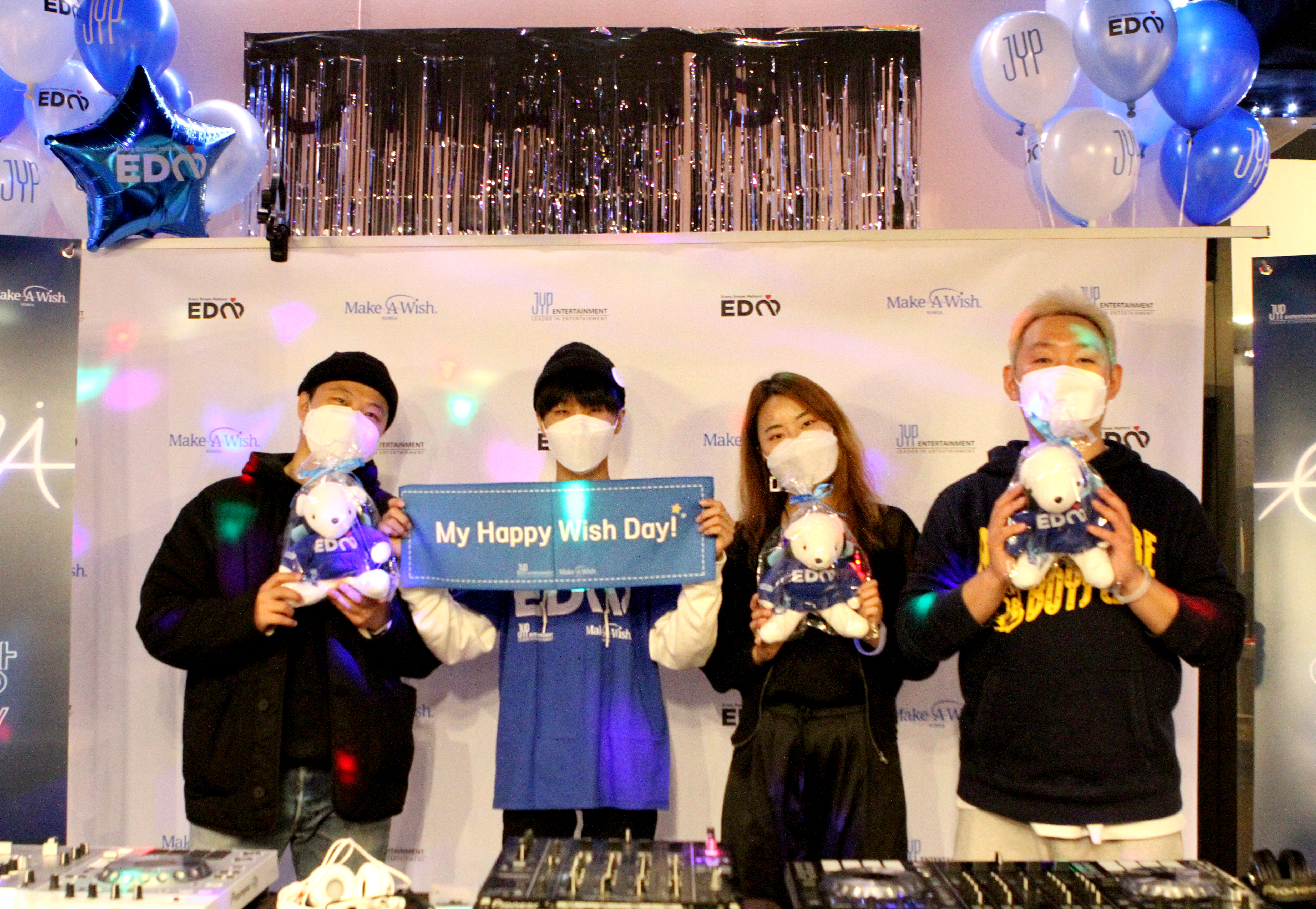 "Jun Sang really improved a lot. He's a good judge of BPM and has a good sense. The overall music flow is also well arranged. He’s improved so much."
"I didn't know it would be this great. I was worried if he could continue for a long time, but I guess I was worried for nothing. I didn't know Jun Sang was that good."
After Jun Sang's DJing performance, which lasted for about an hour and a half, DJ teachers who knew his usual skills all praised Jun Sang. Jun Sang's mother, who never left her seat and captured every moment throughout the performance, was also deeply moved by her son's long performance. She sent Jun Sang's performance to family and friends immediately, and her eyes were red with tears because she was proud of her son.
Jun Sang wanted to get feedback from the teachers as soon as he finished the performance.  Seeing Jun Sang reflecting on his performance, saying that there were mistakes in between, we could see his professionalism. It was only after receiving the praiseworthy feedback that he did really well that he finally relaxed and started talking, and if there was an event that needed music at any time, he said, "You can call me whenever you need a DJ.”
Thanks to many people's support, Jun Sang was able to perform on stage as a great DJ.
Although COVID-19 prevented him from holding a DJing party in the hospital, we were able to have the DJing party with his family and friends. I hope that the DJing performance on this successful day will be a great foundation for Jun Sang, who became a DJ, and that he will give him a great time to groove to the rhythm for other children. Jun Sang wishes to create music that comforts someone. Stay healthy and watch Jun Sang's shining future together!
* JunSang had his Wish Day on mid-November before the government’s social distancing level was increased.
All the participants followed make-a-wish’s policies regarding the coronavirus.
(Check the policies: WorldWishDay (campaignus.me)
Your comment